When a Little Meme Takes a Hostage: #LittleMarco vs. #FreeChrisChristie 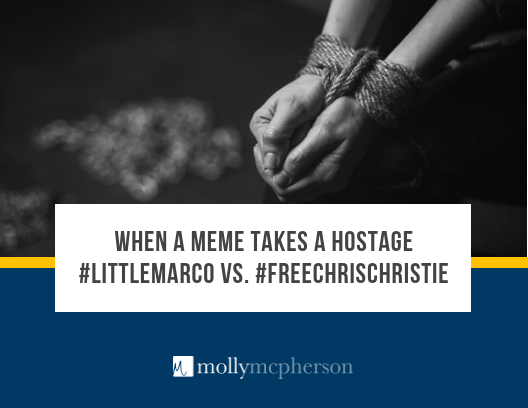 Without question, the meme has become the delectable digital Easter egg for followers of this election season.

Sure, political satire in the meme form has been around for many years, but this election cycle has created a demand for these infectious, yet timely viral memes. When a real-time political event is happening live, like the recent debates, the Twittersphere not only wants a meme, they demand it. 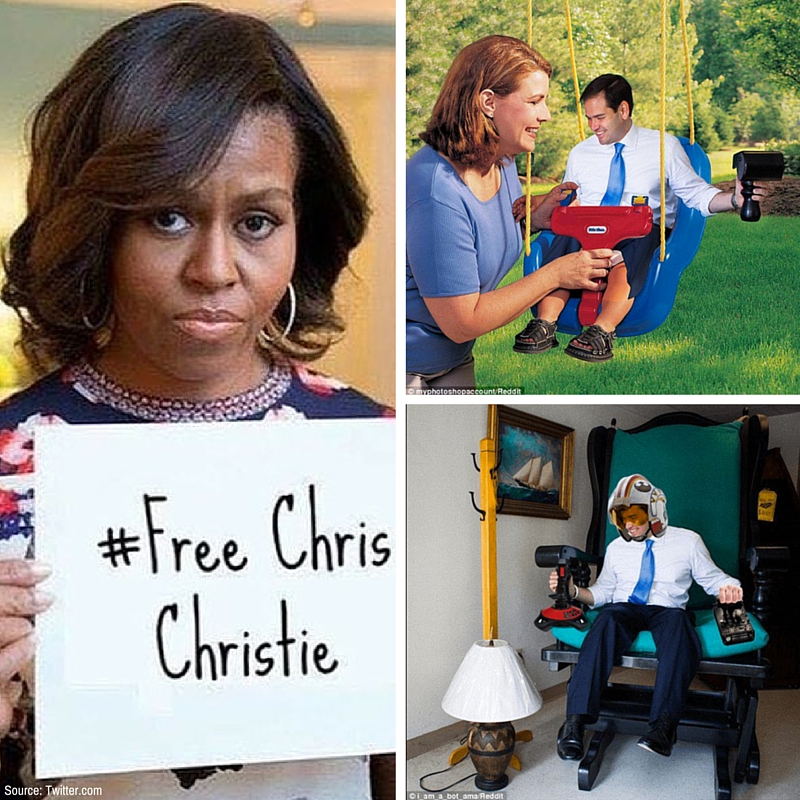 Two Republican candidates each had to deal with a meme-problem over the past week. Governor Chris Christie, for being held hostage by Donald Trump’s press conference (#FreeChrisChristie) and the reappearance of a photo of Senator #LittleMarco Rubio sitting in a large, overstuffed rocking chair.

Both happened – no surprise – at the hands of that mixer Donald Trump. These two memes stood out from the glut of others because they had the meme trifecta for staying power: timing, a great image, with a healthy dose of snark.

It also begs a new question about the PR response in the new digital area: How does a candidate respond to being a subject of a damaging viral meme?

Reputations and memes are like flies on flypaper. You can never get unstuck from it without dying in the process. Candidates who have received the meme treatment simply have to live with the digital residue. 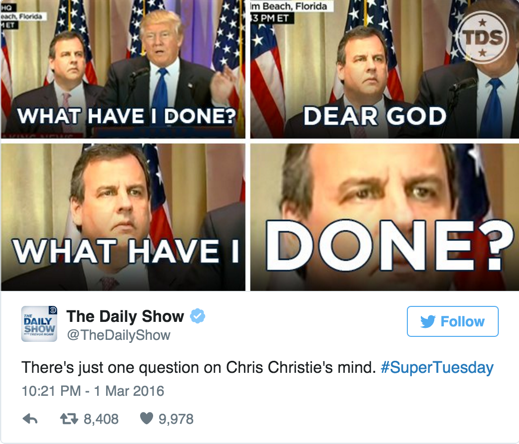 The meme clock started on Governor Christie as soon as his eyelids sputtered standing behind Donald Trump, whom Christie endorsed before Trumps’ triumphant Super Tuesday.

In Christie’s defense, Trump’s quasi-rally/press conference doesn’t exactly have an official protocol for how endorsees should participate.
Cheer? Clap? Who knows? The problem was, neither did Christie nor any of the aides he was furtively scouring the room looking for in desperation. (My guess, this is where the hostage look took root).

Unfortunately for Governor Christie, reframing the meme is an unbridgeable (sorry) task. He wanted us to know that he ‘gets’ the joke and wants us all to agree that it’s silly and unsubstantial.

Yes and no. The memes were silly – no – hilarious. But the damage was substantial and damaged the Christie veneer.

A few days after his meme mess, Christie told reporters at a press conference, “No, I wasn’t being held hostage. No, I wasn’t sitting up there thinking, ‘Oh my God, what have I done?’”

Here’s where Christie makes his move.

“I was sitting up there — standing up there — supporting the person who I believe is the best person to beat Hillary Clinton, of the remaining Republican candidates, and it’s why I endorsed him. I understand everybody had a lot of fun with it. It doesn’t matter to me.”

Christie’s approach was a sound one. Face it head on, and then move on. Christie used a standard (aptly-named) P.R. technique called bridging. Simply put, bridging gives someone the means to change the narrative by moving from one connecting idea to the next, but on their terms.

It’s like a governor of a state, let’s say New Jersey, telling someone stuck on the George Washington Bridge for hours on end, “I know it stinks to sit in a traffic jam, but hey, look at this view of the Hudson River.”

Christie will never lose the residue from the hostage meme; it’s there for good. But it gave him the option of never having to speak of it again by addressing it at a press conference. 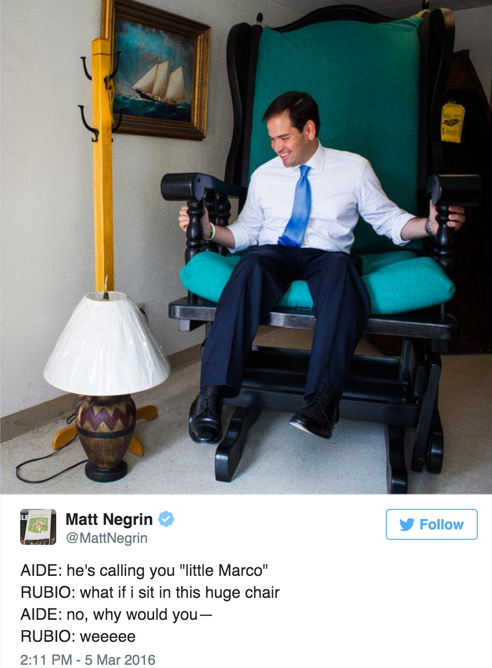 As Marco Rubio’s campaign sputters into this Thursday’s Republican presidential primary debate, he is still dealing with a little meme problem of his own.

The meme started with a photo resurfaced during the last Republican debate of a smallish Rubio in a not-so-small rocking chair taken last August during a stop at a furniture store in Franklin, New Hampshire.

Unfortunately for Rubio, the Internet pounced. The meme took hold when the big chair photo of a little Rubio resurfaced with the hashtag, #LittleMarco. This sticky meme and moniker will likely follow Rubio right into this Thursday’s debate.

Rubio, however, used a different tactic than his former opponent Christie. He refuses to acknowledge the #LittleMarco meme or hashtag even exists.

Wise move. Since Rubio’s biggest mistake was not having a campaign consigliere advise him not to sit in the chair; there isn’t any reason to acknowledge the meme when Trump was the person who started it in the first place.

Anyway, Little Marco has bigger things to worry at the moment. According to reports, there is a battle being waged within Rubio’s campaign on whether he should end his campaign and sit out of his home state primary on March 15.

He just needs to make sure he sits in a smaller chair.