Minnesota Dentist Tries To Save His Own Skin 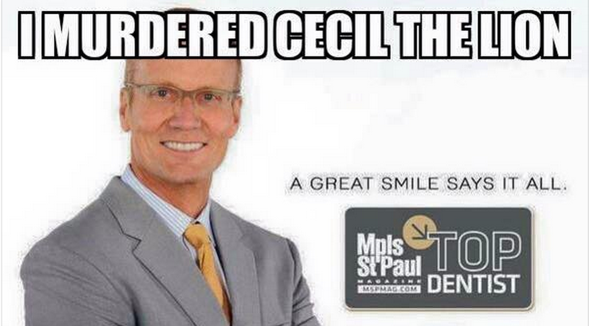 Dr. Walter Palmer has officially knocked Marathon Man’s Dr. Christian Szell as the world’s most reviled dentist after it was reported he participated in the illegal killing of a beloved lion named Cecil, a tourist favorite who roamed Hwange National Park in Zimbabwe.

News outlets have exhaustively reported on how Palmer and his hunting party are accused of luring Cecil out of the park’s protected area at night and shooting him with a crossbow.

This act, along with sloppy social media, practices, has launched Dr. Walter Palmer into a Digital Death Spiral.

Once his name was released by Zimbabwean authorities for being wanted for questioning in the killing, Palmer has now gone from the hunter to the hunted as reporters and animal activists have descended on both his Minnesota home and dental practice to condemn him for Cecil’s gruesome death.

Palmer hired a local PR firm to handle this crisis on his behalf, but even the most masterful crisis consultant would have their work cut out for them when trying to rehabilitate the lion slayer’s image.

Apparently the firm agreed because a representative from J Austin and Associates tweeted a statement stating their work with Palmer was complete.

After only two days on the job.

The crisis communications plan the firm deployed earlier in the week said that Palmer, among other things, regretted the killing of Cecil and insisted that he thought his tour guides obtained the necessary permits.

Despite this crafted message, Palmer’s name and image are now forever linked to this lion. A social media bellwether: if you’re a meme, you’re in trouble. (Search ‘Bill Cosby’ and ‘meme’ for proof).

At the moment, Palmer is out of work, out a PR firm, and out of touch with the media as the story continues to churn all over print, television, and online.

It’s almost guaranteed to have the legs to make it well into the slow news month of August, which means Walter Palmer D.D.S. still has to weather the storm for quite some time.

In the meantime, was there anything Palmer could have done that would have prevented the intensity of this scrutiny placed on him when he was revealed to be Cecil’s killer?

Here are three of the PR targets Dr. Palmer had failed to hit before he entered into his personal digital death spiral:

1. Not prepared for the ambush: Just like Cecil, Palmer was lured into making a statement when the story first came to light. His first media attempt was too soon because it didn’t show enough remorse or contrition. Clearly he did not anticipate the emotional impact this story would have on the public as it crisscrossed the globe, nor did his PR firm.

2. Too exposed: Dr. Palmer and his business, Rivers Edge Dental, are suffering through the worst social media backlash in the history of modern dentistry. Online commenters are flooding the dental practice’s Google Review and Yelp listing with disparaging remarks about Palmer and his practice. Community pages have popped up on Facebook with names like, “Shame Lion Killer Dr. Walter Palmer and River Bluff Dental.”

Reporters have exhaustively mined Palmer’s social media accounts and pulled numerous photos of him posing next to his latest kills. And they keep finding more photographic evidence as the story moves into day three.

#CecilTheLion and #WalterPalmer are trending all over social media and will continue to follow Palmer through his tattered career.

As soon as Palmer had detected even a scent of trouble, he should have secured all professional and personal accounts, including online reviews. Once the commenter presses ‘Enter’ on the keyboard, it’s almost impossible to undo. In today’s digital age, all professionals should have a digital ‘go-to team’ at the ready in case there is any story – good or bad – that will drive people to your online accounts.

3. Feeding the Beast: Palmer is giving the media masses plenty to nibble on as they make their way through his photos, comments, and other hunting-related content found on social media. Not to be missed, prior legal issues including a $127,500 payout to a former employee to settle a sexual harassment claim.

If reporters smell a story, they’ll attack. Admittedly it’s difficult to retrace and nuance your past for the public’s review, but it’s not too difficult to prevent new stories cropping up based on current events and official comments.

The first attempt at a message should be the best attempt. Make sure it answers the questions the public wants to know and be sure that it’s solid. It needs the staying power to hold a reputation as it rides through the crisis.

We now know Palmer’s first PR plan of action to help rehabilitate his image. To sum up, he’s going with the “I’m sorry, but it wasn’t me, it was them,” defense. Even if proved true, it clearly isn’t enough to stave off the savage criticism.

With his business and reputation at stake, Palmer and his [TBD] PR team will need to change the narrative. The next attempt not only needs an apology along with a massive helping of goodwill but a nod to the lion as well.

Dr. Palmer needs to remember Cecil since the public will never forget him. 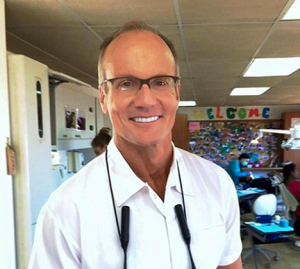 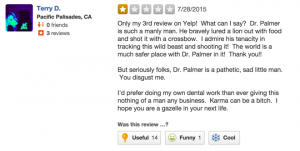 Screen shot from RiverBluffDental.com the day Dr. Palmer’s was sought for questioning in the death of Cecil the lion. 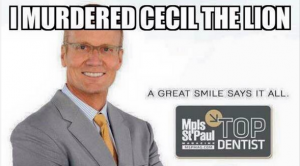 One of many Walter Palmer memes.

(A version of this post originally appeared on TheCommunicationCenter.com)