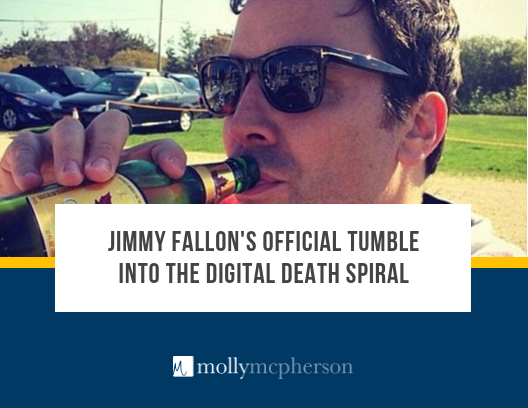 Who: Jimmy Fallon, the lovable host of NBC’s The Tonight Show.

How did he get here? All it took was one bad tumble this past June to get people to start thinking that there may be a little darkness hiding behind this light and upbeat talk show host. 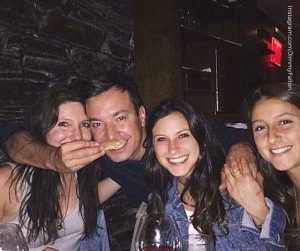 Smoking gun? Fallon was seen the evening before his severe finger injury dining at an UES restaurant sipping wine and posing for photos with fans (pictured)

Fallon first entered into his Digital Death Spiral after photos surfaced of him enjoying a night out drinking. The photos weren’t incriminating, but the timing sure was.

The photos were taken the same night Fallon experienced a late-night mishap at his home that almost resulted in a severed finger.

The backstory arrived first. Ring avulsion is serious business, but the funnyman tried to downplay (insert PR spin) the severity of the injury by giving the story a homey twist. Hint: It involves a rug and Fallon blaming his wife. Hahahaha.

But, lucky for Fallon, the public bought his cute story and a crisis was averted.

Eight weeks later, however, Fallon is back in the news with another incident. He apparently chips his tooth while trying to open a cap to scar repair gel for his injured finger. The updated spin involves another Instagram post – this time at the dentist. It’s cute, but we all know better. Gel in a childproof cap? Nope.

Bad press averted, but not for long.

In his latest injury, the accident-prone TV host had been celebrating at a party in his honor in Cambridge, Massachusetts after he was awarded The National Lampoon Elmer Award for Excellence in Humor by Harvard University’s legendary comedy magazine.

Fallon thanks his DDS for fixing his tooth after cap mishap. Continues his PR DDS.

Fallon’s Crimson tumble was caught on video by an eyewitness and eventually made its way to their Instagram account (welcome to 2015 folks). A little PR 101 for the social media age, check out the comments from media outlets like Access Hollywood (I know) to see first-hand how a Digital Death Spiral starts.

Journalists mine social media accounts all the time for footage of anything interesting, and this video of the falling Fallon certainly qualifies.

Have we seen him here before? No, which makes this Digital Death Spiral watch so interesting. Viewers like Fallon, NBC likes Fallon, Justin Timberlake likes Fallon, but gravity apparently has a problem with Fallon. Apparently the NYC bar crowd has been privy to the Fallon’s ‘happy drunk’ persona for quite some time, but with this latest tumble, Fallon’s alter-ego has been officially outed.

Damage Control: Fallon’s third incident was a charm that started the DDS. The incident was quickly picked up in by the MSM after the video emerged.

Fallon tried to do a little damage control on his own by posting a photo of his bandaged digit on Instagram. As the news stories started to pick up on the loose cannon Fallon narrative, he went back to the digital well and posted a photograph of himself on Halloween (with a conveniently damaged hand) along with two photos of his daughter.

Spiral Outcome: There is no doubt that Fallon will weather this PR storm, but bad press is never a good thing for lovable celebrities. The New York Post headline, “He’s a mess,” doesn’t help matters either. He’s in no danger of being dumped by the network, but his injuries have now exposed him as a celebrity who is open to increased scrutiny.

No drink to Fallon’s lips will never go unnoticed or not posted from here on out. And for a guy that thrives on social media, this is not a good thing.

To Fallon’s credit, he’s trying to keep up with his good guy image by posting positive PR-type photos to his Instagram feed. There you will see images of his young daughters, Fallon operating heavy equipment (“How can I have a drinking problem if I can do this??), and a photo of that ‘no big deal’ Jägermeister-related injury.

FWIW: Someone told me today that they added Fallon to their Celebrity Death Pool.