How Executives Are Being Eaten Alive by the Social Feed 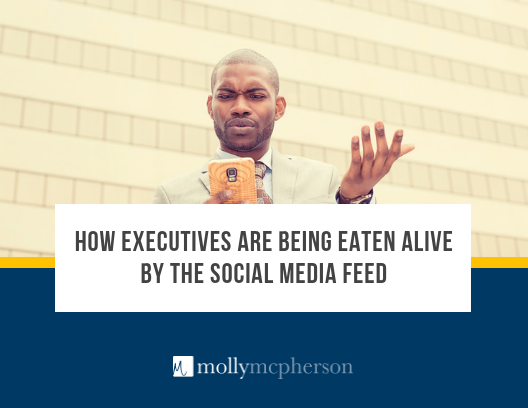 Recently, I conducted a communication training session for a group of board members just as news of the turmoil at Uber began swirling. I felt the situation at the car-sharing tech giant was the perfect illustration of the urgent need for reputation management at the CEO level: Amidst allegations of sexism in the workplace, a board member of Uber complained that women serving on corporate boards leads to unnecessary chatter.

As I summarized what happened to the room one of the participants – a late Baby Boomer male – exclaimed, without a hint of irony, “But it’s true. Women do talk too much.” There were audible gasps in the room. In his defense, this board member did not appear to make the statement out of malice or for a moment of disruption. It was likely said for humor’s sake or simply saying what he felt at that moment.

In the age of viral, however, saying what you feel can get you into trouble – and how. Google David Bonderman.

Without the proper tools, the next time an exec unwittingly exposes controversial views it could be at the detriment of his or her entire organization, not to mention their personal reputation.

Social media makes it possible for the public to peer into the once closed-door meetings of boards of directors. Because corporate boardrooms are under more scrutiny than ever before, it’s essential to understand, at a very high level, how to position the social feed. This isn’t simply a job for one social media manager sitting a few floors away. It’s a skill every CEO and every member of his or her team needs. In his recent New York Times piece, “How Battling Brands Online Has Gained Urgency, and Impact,” Farhad Manjoo expertly outlines how brand-focused online activism can transform a once powerful company into a vulnerable husk begging for consumers’ forgiveness.

It doesn’t always have to start with a scandal, which is what triggered the eventual downfalls of Uber CEO Travis Kalanick and Fox News host Bill O’Reilly. When Pepsi debuted its tone-deaf Kendall Jenner commercial last April, the social media outrage was immediate, and the ad was pulled within days. Jamie Horowitz, president of Fox Sports National Networks, was abruptly fired following allegations of sexual harassment in July, suggesting the scope of the strain on the media giant. At first, the questionable behavior of Kalanick and O’Reilly didn’t have much effect on whether people used the ride-sharing app or tuned in to Fox News. But once these controversial missteps were processed again and again through the prism of the social media feed, the only way out was straight down.

Okay, so you may be thinking, I know how to use Twitter, Facebook, and Instagram in a manner that doesn’t embarrass my 16-year-old. I’m trained! But as Manjoo points out in his piece, it’s “the swiftness of the fall” that brands and executives should be aware of, because “we live in an era dominated by the unyielding influence of social feeds.” There isn’t time to learn from your mistakes. Once they’re made, they can’t be undone—and they won’t be forgotten.

Time and time again I have to remind the executives and board members I train of the power of social feeds and learn the ins and outs of our current culture, going far beyond the basics of likes, retweets, and surprise viral status. The real skills here are the fundamentals of messaging, authenticity, and safely buttressing your brand on social media—then using it properly to mitigate the damage if necessary.

Manjoo writes, “[S]ocial media elevates consumers over corporate marketing; suddenly what matters isn’t what an ad says about a company, but what your friends think about that company.” Consumers are aware now, more than ever, of the power they have. Brand transparency should be the rule of order from the beginning.

Have a set of pre-written statements prepared for a variety of crisis scenarios. History does have a way of repeating itself, which is why you should both study the past and look ahead to the possibilities. The latter encompasses the “black swan” issues that may never have occurred before but can happen at any time.

Organizations spend a great deal of time crafting a brand voice. But the person at the top needs to be dialed into the appropriate response and prepared to lead. He or she ought to guide the rest of the team on next steps, instead of the other way around.

(3) Don’t be afraid to speak directly.

Hiding behind a comms person, or worse, the legal department can only add to your woes. Speak out, and be firm about the points you’re making.

The best place to share your message is often exactly where the mess was originally born: on social media. This can take the form of a blog post, media statement, video, or tweet, but it should be done in the first person. This will pack the message with the transparent and authentic punch it needs.

Set up an online alert for your name and your company name, and keep an eye on what’s being said about you and your organization. Don’t worry about responding to each and every comment, but make sure your messaging overarches the issue at hand.