218: Unethical Leadership in Action: The Tampa Police Chief Who Flashed a Badge 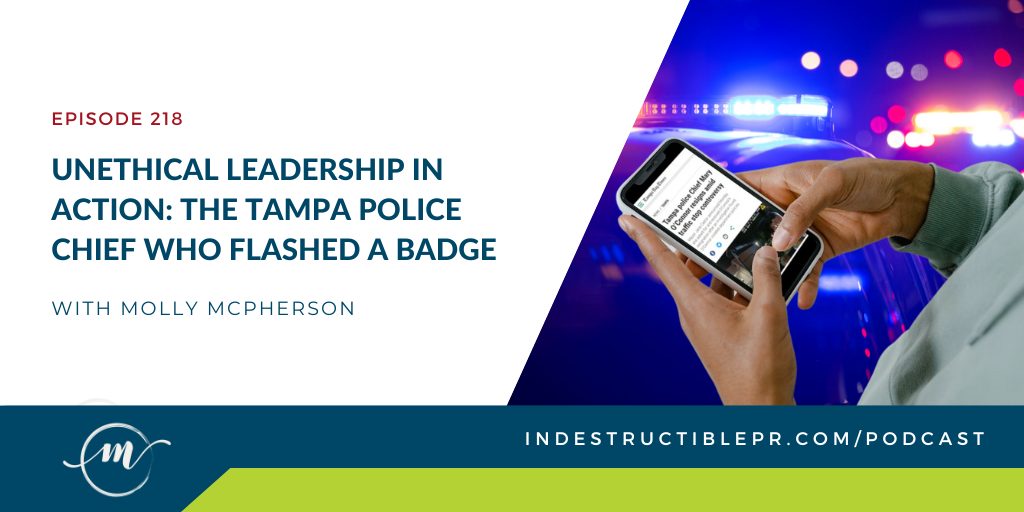 After body cam footage emerged showing Mary O’Connor, the Police Chief of Tampa, Florida, trying to get out of a traffic violation by showing her badge and the internal affairs investigation that followed, she was ultimately forced to resign.

This episode takes a look at this incident to see what can be learned from a PR perspective, and breaks down three easy choices in ethical leadership that can save your reputation. Hear the entire body cam clip and learn what guilt sounds like, how guilty people behave, and how this sheds light on unethical leadership. Also covered is the statement that was released when the truth came out and how Mary tried to protect the lie instead of taking responsibility for her actions. Hear more about what it means to be an ethical leader in any organization and how to build an indestructible reputation.

YouTube: “#Tampa #Police Chief Resigns After Flashing Badge To Get Out Of Golf Cart Stop”

Indestructible: Reclaim Control and Respond with Confidence in a Media Crisis – Audio Book Listen and Subscribe on Apple Podcasts

Wanting a little more than what you see on TikTok? Join me on Patreon for extended content, exclusive podcast episodes, and regular Crowdcast chats.  If you’re an aspiring PR pro or already working in the field, you can access professional monthly webinars, discounts on 1:1 sessions, and upcoming programs. Join me on Patreon!