206: How to Avoid Saying Something You’ll Regret In Your Next Media Interview 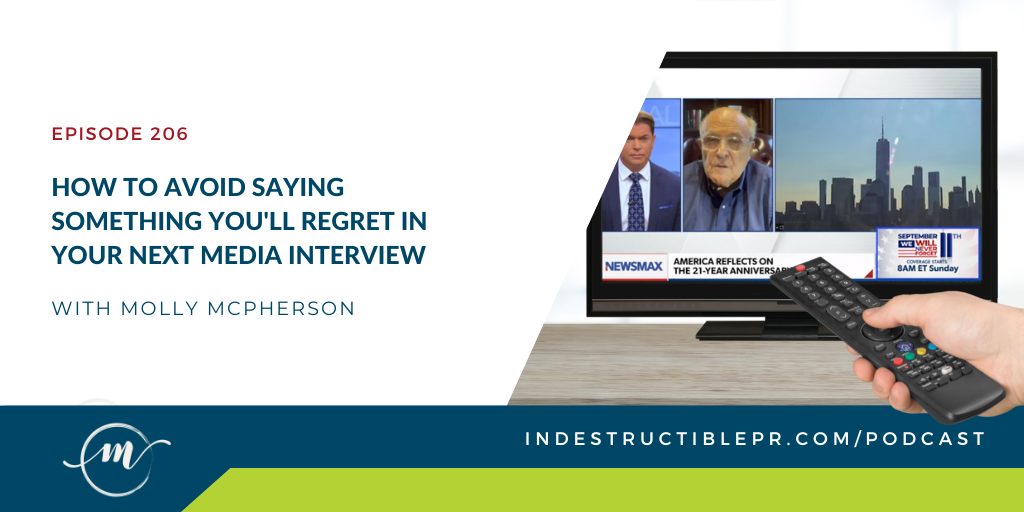 Recently, Rudy Giuliani, formerly known as ‘America’s Mayor,’ sat down for a media interview with Newsmax, and likely it did not go as intended.

One unprepared quote later, and the resulting gaff ended up all over social media. This type of thing can happen to anyone, and this week’s podcast looks at why this interview was such a train wreck. Tuning in, you’ll find out how Giuliani started off on the wrong foot, why the biggest mistake he made was treating a media interview like a conversation, and you’ll hear the soundbite of the shocking faux pas that rocked headlines as a viral pull quote.

This episode also includes five important things to consider to avoid saying something you’ll regret in a media interview, as well as tips on how to handle mistakes, difficult questions, and tough reporters! You won’t want to miss it.

• Thoughts on the 21st anniversary of 9/11 and how much has changed.

• Rudy Giuliani, his unofficial title of ‘America’s Mayor,’ and his subsequent downfall.

• The Newsmax interview with Giuliani and why it was such a train wreck.

• How a pull quote is different from a soundbite.

• The importance of preparing for a media interview.

• The soundbite where Giuliani got off on the wrong foot.

• Five things to consider to avoid saying something you’ll regret in your next media interview.

• Why conducting an interview ‘off the cuff ‘ is one of the most dangerous things you can do.

• What to do if you make a mistake in an interview.

• Tips for answering difficult questions and dealing with tough reporters.

“Rudy Giuliani to Newsmax: US ‘in More Danger’ Than Before 9/11”

Indestructible: Reclaim Control and Respond with Confidence in a Media Crisis Audio Book