181: When Will Smith Slapped Chris Rock at the Oscars in Real Time 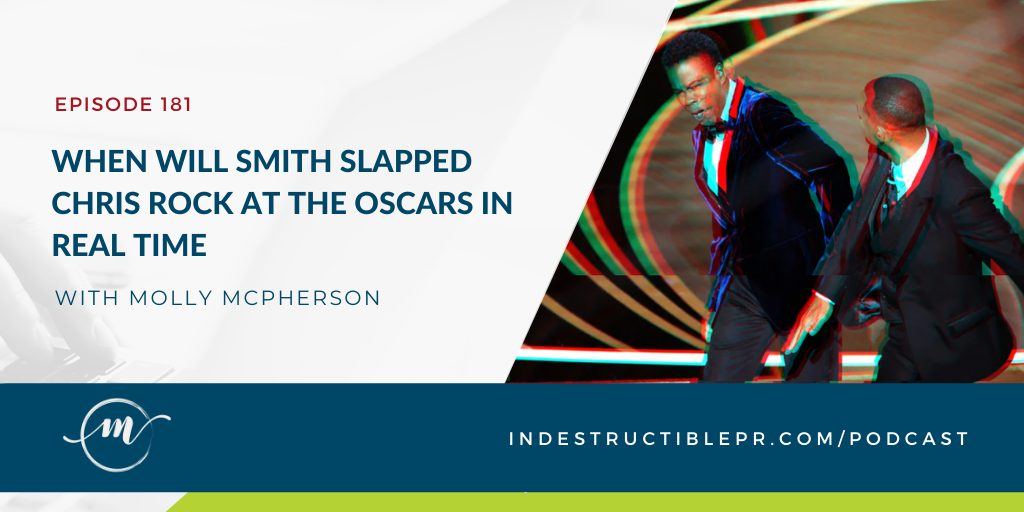 By now most people will be somewhat familiar with the controversial events of the 2022 Oscars. Apart from the awards and winners, the incident in which Will Smith hit Chris Rock after a joke aimed at Jada Pinkett Smith, has clearly stolen the headlines and overshadowed the entire night.

The situation provides a great opportunity to look at how a crisis unfolds in real-time in the contemporary climate and the role of social and digital media in the process of public response. One of the main questions that arise, especially through the lens of PR, is around the short- and long-term effects that this will have on both of the actors’ careers.

Tuning into this episode, you can expect a brief look at what actually happened, why it might have happened in the way that it did, what this will mean for those involved, and some thoughts on the best ways that the PR teams can help their clients respond. So, for all this and more, listen in on the Indestructible PR Podcast today!

•    A quick replay and recap of the event in question on Oscar night.

•    Some of the responses and comments online to Will Smith’s actions.

•    A clip of Will Smith’s acceptance speech after winning the Best Actor Oscar.

•    Thoughts on the effects of the incident on Chris Rock’s career and reputation.

•    What this means for Will Smith going forward for the rest of award season, and his career.

•    Putting the event in the context of the last two years and the Black Lives Matter movement.

•    The PR teams that will be helping both actors with their responses.

•    A theory on Will Smith’s mindset going into the award show and how this played out.

•    Final thoughts on the aftermath of Oscar night for the two actors.

•    Today’s Indestructible PR Tip: the dangers of out-of-control emotions, and the importance of accountability.

“There’s certainly a lot of commentary about the Oscars. But what happened with Will Smith and Chris Rock, it doesn’t even matter who won.” — @MollyMcPherson [0:08:23]

“I’ve been on TikTok for, two months maybe. One thing that I’ve learned is the views will certainly tell you about which posts people are watching more than other posts. But where the numbers jump exponentially on TikTok in the shares.” — @MollyMcPherson [0:04:57]