Clout or Klout – What’s the Difference?

Let’s get to the bottom of measuring your social influence

You’ve likely heard or have seen the words clout and Klout used online regarding social media and online influence, however, it’s no longer easy to distinguish the difference between the two.

The confusion may soon be a thing of the past because one of the two lost their clout – er, or is it Klout?

Clout by definition according to Merriam-Webster:

1) The power to influence or control situations

2) A hit especially with the hand

This spelling can be used to indicate a person’s or a brand’s clout online when referring to the social media influence in a wholistic sense, but not when discussing the actual rating of their influence. That’s a Klout score.

A person’s online clout determines a Klout score. It’s a scoring methodology or algorithm for determining a person’s social influence.

The term “Klout” is a brand, not a noun. It comes from the website and mobile app Klout.com, which uses social media analytics to rate users according to their online social influence.

Think of it as a scorecard for social media folks – the higher the number from your social media platforms, the stronger the perceived impact online.

Social media influence is determined by analytical factors like numbers of followers and friends. Klout calls them signals. However, it’s the other deeper indicators that can determine the number jump. Mentions on Wikipedia, Bing, retweets, likes, and comments capture the true reach of an account.

To put it all into perspective, President Barack Obama has a Klout score of 99. Justin Beiber’s is 92. The hoi polloi will get an average Klout score hovering somewhere in the 20s with one or two connected social media accounts. 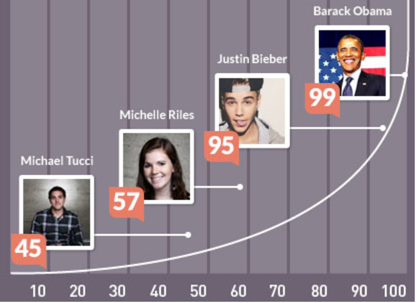 Due to company mergers, Klout.com is no longer an active standalone service. However, there are plenty of other robust programs out there to help identify your online clout.

I use SEMRush, but here are five more social media tools you can use to determine your social clout.