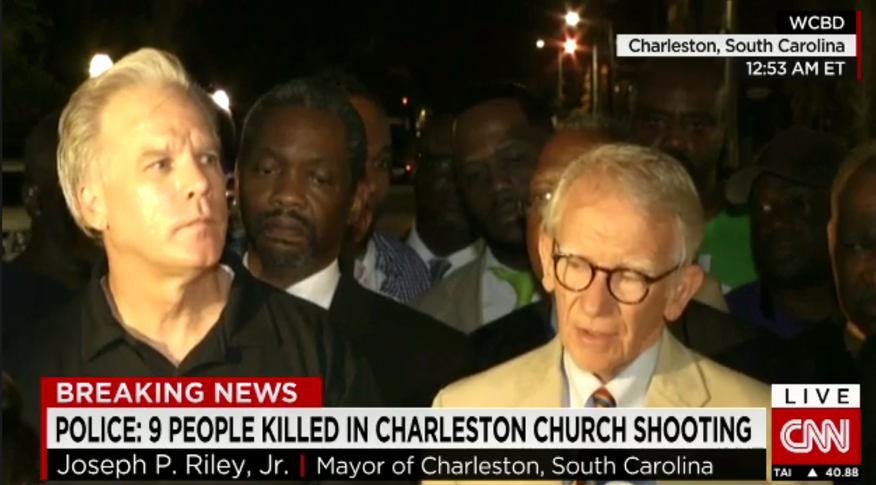 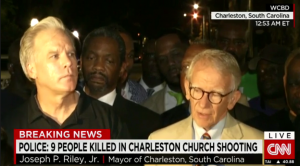 As information from the tragic killing in Charleston, South Carolina of the nine people who were attending a Bible study started to emerge, the first person to address the media was its mayor, Joseph P. Riley Jr.

Approximately four hours after the suspected gunman, 21-year-old Dylann Storm Roof, started his violent attack at the historic Emanuel African Methodist Episcopal Church, Mayor Riley stood along side Charleston Police Chief Greg Mullen to speak to a shocked city and nation.Here are five elements from Riley’s press conference that communicators can use in times of crisis.

It is rarely advisable to speak ‘off the cuff’ during a critical incident that is still unfolding, however, Mayor Riley was clearly up to the challenge.

The long-time mayor was certainly aware of the risk of an unscripted speech at such a delicate moment, but by choosing to stay ‘in his lane’ and leave the details of the case to Chief Mullen, Riley put the focus of his words on the horrific nature of the shootings and how the City of Charleston was going to get through the tragedy together.

“We’re going to put our arms around this church… We’re going to find this horrible scoundrel.”   Riley used the vernacular of a concerned, compassionate, and composed Southern mayor whose town was facing an unthinkable hate crime. Riley’s eloquence added a sense of control to a chaotic event.

Mayor Riley used his experience as one of the longest-serving mayors in the U.S. to his advantage. He stood in front of the camera and spoke in a calm and measured tone that projected an aura of compassion and competence.   Riley’s first emotions, timing, and words came together and framed his message for exactly what it was – a pained mayor giving his town hope. Yes, there were many unanswered questions, but his initial comments were well received for the clarity and emotion they provided.

In the immediate aftermath of a crisis, many times the first press conference we see is from a local elected official standing in front of a scrum of unnamed bystanders. The benefit to the person holding the hastily called presser is that it puts them in the center of the event, but they also run the grave risk of having a chaotic mess mirror the on-going investigation to the viewers watching at home.

Misinformation, speculation, and unprepared remarks can leave the viewer with the impression that both the investigation and the official are stumbling right out of the gate. In this case, the assembled group gave the impression of grieved community – but a very organized one – coming together during a crisis.

Mayor Riley understood his role during that initial briefing. He did not fall into the law enforcement-speak ‘tick-tock’ where the official ‘ticks’ off a timeline of events.

Riley provided a stunned public want they needed to hear. What the City of Charleston thought of this horrible massacre and how it was going to recover from it. He also acknowledged the obvious: that it was a hate crime. And he framed the tragedy for what it was at that moment, a horrific act.

“This an unfathomable and unspeakable act by somebody filled with hate and with a deranged mind.”

Riley evoked Rudolph Giuliani in the hours after the towers fell on September, 11, 2001 when he said the number of casualties, “will be more than any of us can bear.”

Riley spoke the language of a leader communicating the thoughts of a community still shocked and saddened by the shootings. He placed himself in the proper position as a leader rather than the lead investigator.

The official wardrobe of a crisis spokesperson is typically the outfit they chose to put on that morning. In this case, Riley was wearing a gentlemen’s summer suit perfectly appropriate for a Southern mayor when he spoke at his 12:30 a.m. press conference six hours after the shooting.

Riley’s rumpled wardrobe told viewers that he was a committed steward of the city who was working tirelessly along with local and federal law enforcement to help find the suspect and start helping the City of Charlestown to heal.

Riley wore the strength and the courage of a hurting city all in one well-appointed summer suit.

Mayor Riley’s press conferences show communicators how leaders can still be in control of an event even if they are not the ones controlling it. Tapping into experience and knowledge to own the first few hours of an unfolding event is critical for proper communicators in a time of crisis.

(This post was originally published on www.TheCommunicationCenter.com on June 19, 2015.)