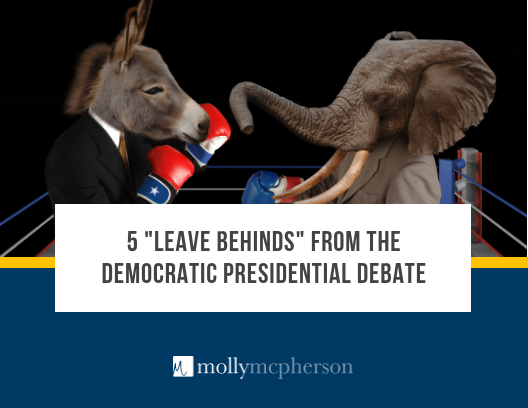 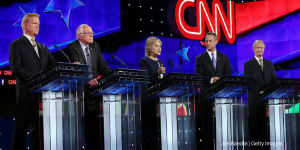 Five Democratic presidential candidates stood together on a debate stage for the first time Tuesday in a fight to win the night.

In past televised debates, the declared winner was typically the most polished and prepared candidate who left audiences with a clearly defined key message. That winning message was likely delivered with either powerful conviction or with a witty retort that had the staying power to appear in the following morning’s print editions.

However, the debates of today – live-streamed and disseminated moment by moment on Twitter – are all about the leave behinds. What comment, quip, or facial expression will find a second life in a tweet, post, gif or meme long after the candidate has left the podium?

The candidates and their teams are well aware of the savvy digital mass sitting in front of their computer screens waiting to pounce on that meme-worthy moment.

Thankfully for the candidate, it’s a two-way street. Yes, there are plenty of posts skewering the candidates’ performances, but plenty of opportunities too if you say just the right message that can be packaged perfectly in a 140-character tweet.

All five candidates left something behind last night. But were they moments that fully captured that candidate’s key message?

Let’s take a look at some of the candidates’ leave behinds from last night’s debate.

Sen. Sanders wanted a passionate debate on substantive policy to make the other candidates “#FeelTheBern.”

Sanders was passion-plus, complete with pointing fingers and a booming voice. He was always ‘in the moment’ and gave authentic answers in all of his exchanges. Nothing Sanders said managed to stand out because everything he said came with the same conviction.

Clinton wanted to show her fellow candidates what a seasoned public speaker looks like on a the debate stage while patiently waiting for the Benghazi ball to drop.

Clinton came to the debate battle-ready. She was polished, relaxed, and projected a confident demeanor despite knowing her head would soon be metaphorically served to her on a platter from at least one of the candidates when the email server issue was raised.

She delivered, with the help of an unlikely solid from Sanders.

Sanders boomed, “…the American people are sick and tired of hearing about your damn e-mails.”
It not only brought the debate to a halt, but it blew the private email server issue right off the battlefield.

Leave behind: Never stop an opponent from making you look like a winner.

Up until the last question of the night, O’Malley’s leave behind was his predictable ding against Donald Trump. The debates were Trump-free up until that point, so the mention was unnecessary and wholly unoriginal for that matter. We’ve heard that carnival barker line ad nauseum. That would have been a deadly leave behind for O’Malley.

Luckily for O’Malley, he was locked and loaded and patiently waiting for the appropriate time to blast the National Rifle Association. The audience cheered.

Leave behind: If you’re only going to deliver one lasting message, let it be your last message of the night.

Would anyone be surprised that the number one Google search question about Senator Jim Webb during the debate was, ‘Who is Jim Webb?” No surprise since Webb didn’t offer anything tangible for voters to chew on other than his complaining about the disproportionate response time compared to the other candidates. Even Vice President Joe Biden’s absence from the debates made more of an impact than Webb’s performance.

Leave behind: The Marine, who fought in the Vietnam War, crumbled over time restrictions. Pick the right battle. 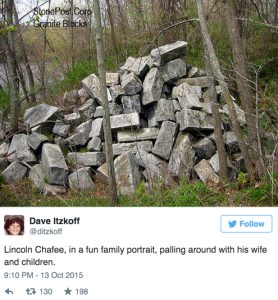 He has been called the invisible candidate by for a reason. No one noticed Chaffee in this debate, even moderator Anderson Cooper seemed to overlook him standing to the right of Martin O’Malley. Or was it Bernie Sanders? No matter where Chaffee stood on stage, no one knows where he stood on the issues because the only solid thing he delivered was comparing himself to a solid, block of granite.
Leave behind: Never leave them with a meme-worthy moment.

The GOP presidential front-runner may not have been on the debate stage, but he was on center-stage online as he live-tweeted throughout the two-hour event. Trump said he would not hold back, and he did not disappoint. Many Twitter users engaged with the candidate throughout the debate, which made Trump arguably a bigger presence than a few of the other lower-tired candidates.

Most of the other Republican candidates were tweeting during the debates, but Trump cut through the Twitter clutter by giving biting, attributable tweets discussing how bored he was with the debate and the candidates themselves.

“Sorry, there is no star on the stage tonight,” he tweeted

Leave behind: Social media invites everyone, including the carnival barkers at home, into a debate.

This blog post by Molly McPherson originally appeared on The Communication Center Blog.