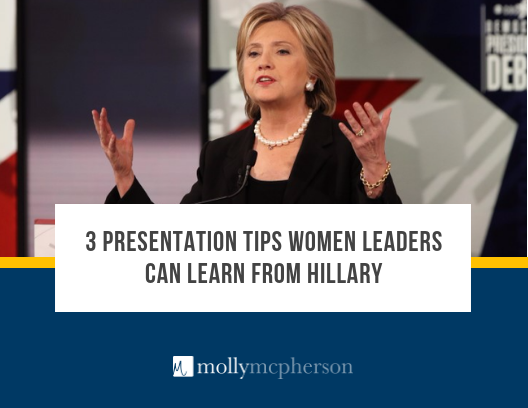 Whether you are a woman in politics or business, the road to success is markedly smoother for women who possess solid communication and presentation skills.

Unlike her male counterpart, a woman at the head of any room has the added burden of being on display when they give a presentation, headline a speech, or begin their opening remarks in a political debate.

And no other woman in recent memory has been scrutinized more for her presentation style than former Secretary of State Hillary Clinton. From her time as the first lady up until last Saturday’s Democratic primary debate at Drake University in Des Moines, Iowa, Hillary Clinton has endured regular examination of her demeanor, style, tone, attitude, hairstyle, voice, and even her laugh.

It’s a safe bet that not many viewers could tell you what Sen. Bernie Sanders or former Gov. Martin O’Malley wore in the debate, but many could likely recall that Hillary Clinton wore a black pantsuit set off with a large strand of pearls. Clinton strayed from her signature bright colors to don an outfit appropriate for a political candidate on a debate stage less than 24-hours after a tragedy; in this case, the terrorist attacks in Paris, France.

Here are three other presentation style tips that women, in particular, can glean from Hillary Clinton’s performance at the debate.

Candidate Hillary Clinton is the perfect example of how someone can go from being just an ok speaker to a more fluid and polished one. In her first attempt to become the Democratic presidential candidate in 2008, Clinton’s speaking style was shrill, loud, and extreme. Now it’s more measured and soft; which viewers clearly saw last Saturday night.

Clinton’s speech, inflection, and pace matched that of the moderator, CBS News political director John Dickerson. The somber tone of the event caused Dickerson to ask his serious questions with a smooth delivery. Clinton responded in kind by offering her remarks in a slow, measured pace. She never spoke too quickly and modulated her voice even when under direct attack from her opponents. Clinton never took the bait. She’s now a pro who knows how to keep her tone under control when attacked.

All female speakers can learn from this tip; when verbally provoked, keep your emotions – and your speech – in check. Remember to speak for the moment. It’s good to be effervescent and fun in a casual speech yet you can also be deliberate and heartfelt in a serious one. Presenters should always match their tone with the mood of the moment.

The debate stage offers a much different viewpoint compared to the typical set-up for a public speaker on a stage or the dais. Candidates have limited options on where they can set their eyes because they need to focus most of their attention on the people who matter most, in this case – the viewers and potential voters at home. But presenters can learn about eye contact from the rhythm of the candidate’s eyes as they bounce from camera to moderator, back to the audience.

Similar to her hand gestures, Clinton’s eye contact changed throughout the debate. Eyes were up and focused on the moderator when Clinton listed a well-rehearsed list of her accomplishments, but were cast downward when the topic turned to the unfortunate turn of events in Libya.

It’s a cliché, but it’s true – eyes are the windows to the soul. There is no quicker method to understand a speaker’s true intention then by following the path of their eyes. Uncertainty, dishonesty, confusion can be as easy to spot in darting eyes just as happiness, truthfulness, and influence can be seen in the eyes that are focused and directed towards an audience.

Utilizing your hands during a presentation is essential for emphasizing the important points in your speech. Use them well and your message lands as intended. Use them too much; it’s distracting. Too little? You come across as wooden, and your message gets lost in the boredom.

On Saturday, despite her controlled delivery, Clinton was rather animated in her hand gestures and let them do much of the “talking.” Like most speakers, many of the hand gestures and mannerisms that Clinton currently uses in her speeches are fully formed habits that are difficult to shake. But instead of hiding the gesture under locked hands at her side, she used them to stress her points – especially when speaking on serious topics such as terrorism and the economy. Clinton has found the right balance, after years of experience, of knowing when to use and when to curb her hand gestures.

Overall, what can we learn from Hillary Clinton presentation style?

Fair or not, a woman can be judged a little more harshly when they present on stage, but we can overcome these challenges by learning and practicing our presentation skills. Effective and skilled communicators understand the challenges and opportunities and learn from their mistakes.

How can you learn the presentation tactics like the ones used by Hillary Clinton? The Communication Center created a new course just for women titled, Confident Communication for Women. An interactive, three-hour course created by – and taught by – a few of our highly-skilled female trainers on staff that will give you all the tools you need to command a room.

This content was originally featured on The Communication Center blog.